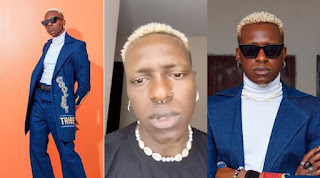 Big Brother Naija ‘Level Up’ ex-housemate, Hermes Chibueze Iyele has cried out over the soaring cost of items in Nigeria.

He said that he has not been able to find an affordable thing to buy as the price of everything in the market has skyrocketed.

The dancer said that since he left the BBNaija house, he’s been struggling with sapa and what makes it more challenging is when sellers give him an expensive amount because he’s now a reality star.

Hermes admitted that life as a celebrity is hard as he’s been planning for his homecoming but he can no longer go to regular markets because bloggers would make an issue out f it.

Hermes also said that even when he tries to order online it is nearly impossible to find affordable things which he needs for the set up.

The model expressed frustration and asked his fanbase, Coolest Tribe for suggestions on how to navigate through the challenge.

Sharing a video of his lamentations on IG, the BBNaija star wrote, ”Omo, Sapa dey everywhere o. Things are just unnecessarily expensive. How are you guys coping?”

In other news, he has confirmed that he loves Allysyn and hopes to have something with her after the show.

He stated this during his media rounds with other evictees, Groovy and Sheggz, that left the reality show on Sunday.

The dancer and artiste said that he understands how him being in a relationship with two women and still wanting to date Allysyn can be misunderstood by people.Hermes also recounted how he made his intentions known to her just two days into being in the house but she turned him down.

According to the poet, he kept trying as much as eight times to get her and it took a whole four weeks for her to finally consider having something with him.

Speaking further, he explained that though he wants to take the model as his third girlfriend, they would have to talk about it as he wants it to be mutual. He said they would need to have that discussion as they’ve not been able to sit down to do so since leaving the house.

He, however, added that they both understand that it might not work out in the end, and if that happens, they are both fine.