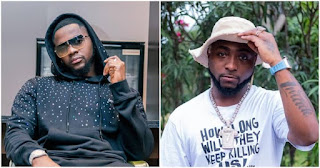 Talented singer and songwriter Kizz Daniel has left many emotional after sharing his experience after losing his son Jamal.

Kizz Daniel had, in a post, he shared via his IG handle in 2021, announced the birth of his 3 Children but loose 1 of the boys 4days after.

Kizz Daniel said it was a crazy experience as he was unable to produced any song for like one year.

In his words: “I didn’t produce music for like a year, yeah for like 8 months I couldn’t recall it. So I was just at home, which is I cried every time, I just cried, it was crazy.”

Fans think of Davido as Kizz Daniel recounts his experience after losing his son.

onyiistar “Now imagine what Davido is going through God abeg .”

nelodiamond123: “It hurts more than people can imagine may God keeps comforting OBO and Chefchi.”

promix_emil: “Haaaaa nobody was aware oooh but what’s it with celebrities losing their sons these days hummmmm hummmm eeehhhhh.”

curtis_yuppie: “Davido is going through the same .”

preciousjudg_: “Omo make Davido no ghost us for long o I fit faint.”

successful_osas_12: “I can relate . It’s so painful to loose someone you love and care for . It’s been more than 1 year I lost my mom and there is no single day that passes that I wouldn’t think about her .”