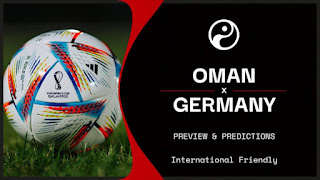 Germany will be looking to build momentum ahead of the World Cup when they face Oman on Kilamity live stream.

Not every nation has taken the opportunity to fit in a friendly before the World Cup but Germany is one of them, and they’ve gone for a country close to Qatar.

For the geography novices, Oman and Qatar are separated by the United Arab Emirates but both sit on the Persian Gulf and the climate will be very similar, proving good preparation for Germany.

Oman as a national team won’t offer Germany too many problems, ranked 75th in the world, though they did only just miss out on the fourth round of AFC World Cup qualifying, finishing one point behind Australia – who eventually beat UAE and then Peru to secure their spot at the tournament. Nearly all of the Oman squad play their club football in their native country with the exception of Faiz Al-Rushaidi, Zahir Al-Aghbari (both Iran) and Jameel Al-Yahmadi (Qatar).