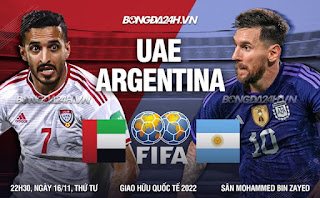 The UAE National team is set to play against Argentina as part of their preparations for the Arab Gulf Cup “Gulf 25″, which will be played in Basra, Iraq, next January. The national team coach Rodolfo Arruebarrena will have all the leading players that were part of the team in the last two years on Kilamity live stream.

The UAE’s argentine coach said in the wake of the friendly game against the ‘La Albiceleste’: “The Argentina national team is a big name in the world. They are also playing great, but they have to be careful, especially in the first game, and as an Argentine, we have great hopes.”

Argentine Football Association announced they would play a friendly match against the UAE right after revealing a partnership agreement with the Abu Dhabi Sports Council, whereby the Supercopa Argentina finals will be played for four consecutive years in Abu Dhabi starting from January 2023 until the year 2026.