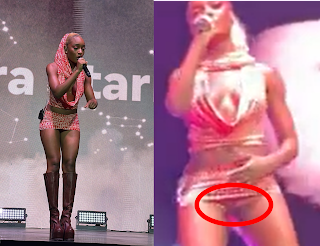 Mavin signee Ayra starr who’s popularly known for her striking fashion sense, has caused a catastrophe online as she was literally seen wearing a very tiny, short skirt, which has made

Ayra starr who turned 18years this year, she was literally born on June 14th, 2002. As typicalAfricans, most of her demographic listeners are, they frown at what she worn at the concert…and most of them thinks she lacks home training and she’s way too young for her age to bedressing seductively.

A high percentage of her fans spoke bad about what she wore, though that has been herfashion style but they couldn’t condole this her particular fashion style this time around.

With all the corrective measures from fans, she was forced to apologize publicly to herfans which she did casually and as she laughed about it.

See Reactions from fans below

@Onejoblessboy reacts: These young girls these days What’s the big flex wearinga pantie for an event?@620weirdo reacts: This one fit use handkerchief sew upandan still get small gele.

@hiyke__vibes reacts: be like una don dey hype this girl too much. well, her bodyher choice. keep going girl. next time come naked.

@Ifeoluwa_x reacts: Wetin she wear so??