[Video] He landed in hospital: Wahala as prankster removes Army officer’s hat as part of prank 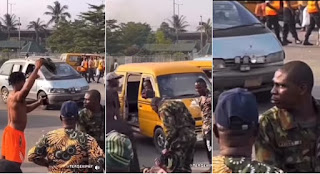 A video making the rounds on social media shows the moment a prankster decided to make a soldier the victim of his prank.

The content creator walked up to the military officer from behind, when he was by a bus stop and removed the hat he was wearing.

He swiftly turned back and descended on the prankster and started beating him till he fell to the floor. Even as he was on lying down, the man kept laying hands on the prankster as he explained that it was a prank.

The prankster pointed to the camera man who was filming, and on sighting him, the soldier angrily charged at the camera guy to probably give his own round of beatings.