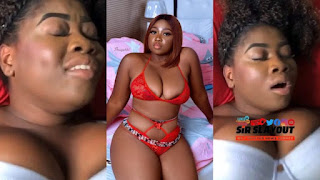 I Chose Nudity Because I Was Once Homeless – Shugatiti

Abena Serwaa Frimpong also known as Shugatiti has said her choice of going on social media with her nude pictures was influenced by her history of homelessnessThe Social media influencer and actress, after becoming homeless and having no one to cater for her, she, therefore, chose to go on social media and do anything to fetch her money to survive.

In an interview with Asempa FM, she revealed that, after she was sacked from her father’s house by her stepmother. She later met a photographer who helped her with photo shoots because she had the curves.According to her, she started to post them on social media and after realizing massive reactions from people across the country they decided to do more of that.

“I was not in contact with my dad, I was alone. It was me after my stepmother sacked me and my father did not bother to find me,” she said.She further revealed that after 17 years of being neglected by her mother, she finally showed up in her life just two months ago.DOWNLOAD VIDEO HERE