Home » »Unlabelled » [Sad News]A FINAL YEAR STUDENT OF UNIUYO AS BEEN MURDERED BY A SUBSPECT, WHO HAPPENS TO BE HIS ROOM MATE

[Sad News]A FINAL YEAR STUDENT OF UNIUYO AS BEEN MURDERED BY A SUBSPECT, WHO HAPPENS TO BE HIS ROOM MATE 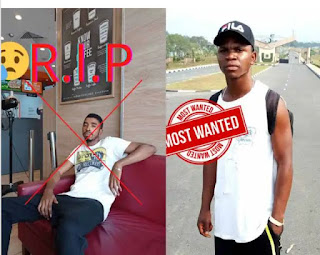 A final year student of Uniuyo, Jesse Gideon Abraham, has been murdered by a suspected ritualist who happens to be his room mate.

From investigations carried out , Jesse was severely hypnotized by these “Ritualist” to a point where he couldn’t recognize his own Father and also went as far as changing his biological name on his Facebook page to “match” that of his Suspected Killers.

In the words of one his relative via social media; He wrote:

This note is to write in detail as much as possible how late Jesse Gideon Abraham was killed in the most dehumanizing way by the same person he “helped”. Please share to endless group school pages and other helpful organization that can help tackle this menace that has been going on in university and society.

He grew up in the North (Kaduna), where he schooled and wrote his first WAEC but unfortunately he was unable to get the minimum grade which would allow him study the dream course of his dad (Medicine), he wrote (WAEC) twice before he eventually got the pass grade in chemistry. But in the process of writing this exam in other to get the pass grade for his dad dream course, he applied for a National diploma course at Kaduna polytechnic (Computer science) which he got since he had a pass grade on all the compulsory subject that would gain him the admission.

He started the course as a novice with no single knowledge relating to computer or even having a desktop or laptop. The program was a 2yrs program which till date i don’t know how but he came out as one of the best graduating student of his set with a Distinction. (It was too good to be true when he told me i had to tell him to go bring his original result to confirm, how can somebody that is still struggling to get a C in 0level chemistry get a Distinction A?!. I saw it with my mouth open and eyes Fully opened i saw his full name and his grade, that very moment i knew he has found his calling)

He was done with the National diploma and he wanted to further (HND).

But like most dads in the north, he would say go down south or east and continue, so you will know your hometown well.

So he started a journey which he never knew he wouldn’t end as expected.

He went down south to UNIUYO where he applied as a direct entry candidate; with no delay he got the admission into computer science because of his outstanding result.

It was time to park up and start a new easy and stress free life as we all know it to be in the north, he landed Uyo where he sort out for accommodation and find a room, One thing lead to another he met a fellow “fresher” like him who also was having trouble getting an accommodation due to the prices of rooms, the ‘Fresher” then pleaded with Jesse if he could pay half while he pays half so they could be roommates. With an innocent mind of someone coming from the north down to the south that sees nothing wrong in helping someone in need, he accepted. Not knowing he accepted a die-hard terminator whose mission was to eliminate him and his dreams from the face of this planet.

This fresher name is ONOJA JACOB ADAH. A year passed, and things looked ok and normal with Jesse. Second year pass just a bit clumsiness which normally anybody will relate it to school stress, the third year it started showing that something was wrong, Jesse started saying things like his different realm. Yes I’ve known him to be a strong believer of God and always supporting Good and shunning evil. But the place he’s coming from was totally abstract from Good or evil.

J is everything okay with you? He sighed and said its just his school department that its corrupt and the system is “infiltrated” with bad people, it then struck my mind that J has gone astray.

Then i started to ask question which i didn’t think i would ever be asking,

“J how your academic result”? he sighed and said “mehn e dey oo”.

I asked just to clear my curiosity,

My whole body got totally cold that moment, 4 carry over J??? How a distinction student from Kaduna poly getting 4F in the space of 2years, how???.

I then saw where all the distraction was coming from, he never had any other person in that school aside Jacob. I advised him like every good friend would do told him things at that side of the country is hard and people are heartless, so i left for Enugu the nexr day to continue my hustling.

We kept in touch once in a while and it seemed he was back to normal as he went for IT and worked at a loan company, from there he went for a competition were him and his team were second runner up (Agro tech. or something related), he was done with IT and he returned to complete his final year which he never completed.

Fast track into the first 2 months of his arrival he started updating some weird status saying his an ambassador of one religion and one God says they have an empire that its doughman empire and some other nonsense i look at most of what he said word to word and none is in relationship to any known school cult slangs or cappings, so i ruled out cultism from the list of possible problems.

As days went by, he updated more frequently about this nonsense. Unbeknownst to me, he was in the full process of being brainwashed; whenever his parents or someone called he spoke like he was given a script to read out, and sometimes the Jacob guy would say Jesse didn’t want to speak to anybody. This Jacob in no time had total control over Jesse, his ATM, his phone, anything partaking Jesse was been controlled by the Jacob including who he talks to or calls.

It was time for Jesse’s final semester exams.. Nobody could reach Jesse. His number was switched off, his parents are way up north so nobody knew the whereabouts of Jesse..

Only for his dad to get a call from a man who happens to be an indigen of Otukpa, Ogbadibo LGA, Benue North, saying he should come and rescue his son before they kill him like they killed the others.

Daddy J tried his best coupled with the situation of things on his side, got some security operatives which lead him to the Jacob village in benue where he has never been or even though in his widest imagination he would step foot in.

On tracing and reaching the place Daddy J said he saw his son and tears rolled down his eyes. A healthy man now looking like a walking corpse in day light (I don’t wish any parent this experience) to make thing more devastating Jesse said he has no idea who his father was (i kid you not this is no scripted movie, this happened life). His dad tried slapping him as every Nigeria dad would and he returned a slap also to his dad. That is when daddy J knew it was not what he thought it was. The security personnel was the person who help wrestle Jesse and got him under control before they conveyed him back to kaduna.

I had no idea all this was going on, one day i got a message from a facebook user id ONOJAH JACOB ADAH say “Pls help, Jesse is in trouble help call the — number) immediately i thought it was all this facebook scammers but then i viewed the profile of this user and it happened to be this “Fresher guy” Jesse had told me in his early days about… and then i called and ask what is the problem and he said that he doesn’t know where Jesse is and is like they took him away and i ask who are the they? he said the bad people, i asked again are you people not supposed to be writing your final exams and he said yes that he has finished his own and then i as what about Jesse and he said he doesn’t know.

That response immediately triggered me and with no doubt i know Jesse was in trouble i called his line all his line where not reachable. I called kaduna and was told how Jesse was rescued and is undergoing both spiritual and physical rehabilitation. we spoke a couple of times and he was sounding “Fine” but i knew Jesse well and could tell that his just trying to act fine..

A month and half later he started pressuring his people that we wants to go back and complete 3pappers he missed… his parent thinking everything was back to normal ok it. (i was against it from the very first day). His dad handed him over to his brother over there in uyo but i knew Jesse needed more than just an uncle’s watch i was in Enugu his parent were in Kaduna he was in uyo the distance was just to much to get a proper grip on him.

Eventually the die-hard terminator still located his target and this time he was fully charge.. This time he took him on their way to the village he called me and from the back ground i knew he was nowhere close to where his supposed to be and he told me he was going to the village with jacob (This same village where he was rescued from half dead) immediately i called his mom telling her Jesse was going back to that village and she was weak and confused, (The first rescue they borrow money which were yet to be pay, his dad shop was demolished as a norm standard in the El rufia administration, his mom works at a private clinic that pays on the low side).

Jesse and his suspected killers

Fast track a month later his dad was still trying to get help and also gather security operatives that would lead him (which cost money) eventually before he could get there this time, what he met was the lifeless body of his son.

Jesse has always stood on the side of Good he always shun evil and was raized in a decent family.. i believe all he was doing was under a powerful spell, spell so powerful that made him denounce his birth name, on his last days he changed his name to ONOJA ESAU ADAH… it was gather that Jesse was not the first this has happend to in that village its more like a ritual they do to keep their self-Young and fortified.

I believe there are more of this terminator out there in schools and society whose mission is to take the star and life away from their target, it doesn’t matter how long it takes them they are willing to wait and enjoy the process of total dominance on their target.

On his latest post, the suspected Killer and Ritualist ONOJAH JACOB ADAH upated “MISSION ACCOMPLISHED” on his last sentence.