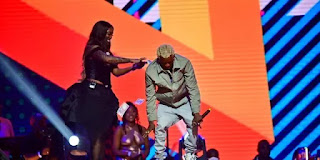 Portable is currently making waves with his 'Zazu Zeh' hit in which he featured award-winning superstar, Olamide, and popular dancer and choreographer, Pocolee.

The excited fast-rising singer took to his Instagram page to appreciate Tiwa Savage for giving him a platform to perform.

He also shared a video where the Afrobeats queen 'sprayed' him as he performed and danced on stage.

Another video also showed his meeting with Tiwa Savage before he performed on stage during the event which was held on Friday night.

In the early hours of the morning, Portable wrote, "I will like to thank the queen, @tiwasavage for bringing me out tonight to represent the streetz! Na this kind energy dey ginger Weyre Olorin o! E don Buzziuah this DE ZEH MBER."