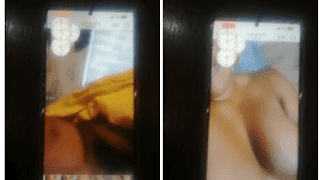 George Wade, the estranged fiance of Nollywood actress, Empress Njamah has come under fire on social media for allegedly sharing the nude video of the actress.

According to reports, Wade created a WhatsApp group where he added multiple people and began posting naked videos he took of the actress in her house, including innocent videos of her taking her bath.

Recall that the duo had separated in 2022 with Njamah accusing her ‘ex-fiance’ of physically assaulting her, in a Livestream via her business Instagram.

The video has since not sat well with Nigerians on social media with many calling out Wade for what they described as an insane and evil move.

@Fswglory wrote: This man created a WhatsApp group, added over 100 people plus bloggers and started sharing Empress Njamah’s nudes and he plans to continue everyday.