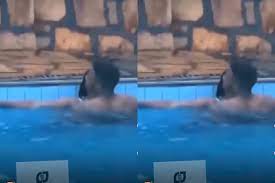 A young man and his girlfriend were swimming in a pool at a popular hotel in Accra when they came up with a clever way to satisfy their raging libido.

They did this by engaging in s3xual activity with each other.

If you watch the video below carefully, you’ll see that the woman opened up her legs quite a bit, giving the young man unrestricted access to her,

and he didn’t waste any time getting down to business.While maintaining a stationary position at one of the pool’s corners, a person who had the suspicion that the two were up to something filmed in a covert fashion the moment that they gave it their all.

Watch the video that’s been provided.