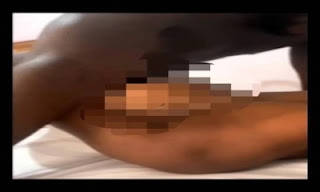 On the internet, a sex tape featuring Prandy Noella, the runner-up for Miss Cameroon, has been circulating. Social internet posts claim that Noella’s ex-girlfriend boyfriend’s shared the footage.

According to what we know, the model was dating Hans (the guy in the video). Later, Noella and Hans broke up and decided to go their own ways.

The girlfriend of Noella’s ex-boyfriend demanded 1 million FCFA or the videos would go viral online. Unfortunately, Noella was unable to comply with her blackmailer’s requests for a variety of reasons.Shortly after, the guy apparently began dating someone else. Later, his girlfriend discovered the sex tapes that her boyfriend and his ex-girlfriend Noella had recorded. The woman then made the decision to use this as an excuse to demand money from Noella.

Since the incident, the stunning Miss has not released any formal statements. Many social media users are sympathetic toward her, while some are still attacking her for damaging her reputation. Others advise her to file a lawsuit against the woman who released her sextape.