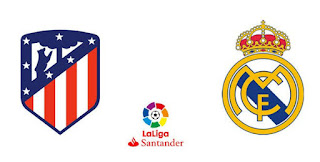 After clinching the La Liga title, Real Madrid continue their lap of honour as they visit local rivals Atletico Madrid live here on Kilamiti. Atletico still need to confirm their place in the top four and given their recent record at home, are capable of matching the champions.

The La Liga title may have been decided, but teams are still vying for some of the positions below the champions. Atletico Madrid are one of such teams and currently occupy the final Champions League place, three points above Real Betis with four matches left to play.Atletico Madrid need to rack up the points in the final weeks of the season but their recent form has been a bit erratic. They have claimed two wins and a draw from their last five La Liga matches and were beaten 2-0 by Athletic Bilbao in their previous fixture.

One positive for manager Diego Simeone is that the Estadio Wanda Metropolitano remains a solid stronghold for Atletico Madrid. They are unbeaten in their last five home matches but were held to a 0-0 draw by Granada in their previous fixture in front of their fans.

Real Madrid will head to Atletico on a high after sealing their 35th La Liga title with a 4-0 victory over Espanyol last time out. They followed up that result with an impressive 3-1 second leg victory over Manchester City on Wednesday to book their place in the UEFA Champions League final.