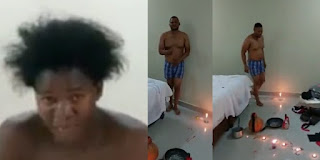 Video making the rounds on social media shows the moment a man caught his pregnant wife naked with another man on their matrimonial bed.
Advertisement--

The distraught man immediatelty turned on his phone camera and started recording the adulterers as he condemned the woman.

The man who is said to be her pastor, can be seen frantically putting on his underwear in a bid to conceal his nakedness.  The Wife showed instant remorse and she was trying to get close to her angry husband to beg him but the man’s rage was boiling at that point and he asked her not to come close.

Another shocking discovery in the disturbing video is the fact that they were apparently doing whatever they were doing surrounded by fetish items. This made the man question the foundation of his marriage to the woman.