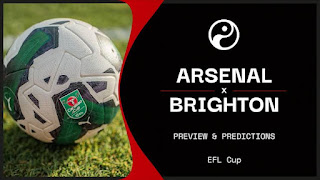 Arsenal will aim to carry their Premier League and Europa League form over to the EFL Cup on Kilamity live stream, when they host Brighton in the Third Round.

England’s European-competing clubs enter the EFL Cup Third Round this week, and over in north London, current Premier League table-toppers Arsenal welcome Brighton to the Emirates. Mikel Arteta’s men are firmly competing on four fronts this campaign and will want to maintain that trajectory for as long as possible.