Home » Entertainment Gist » Erigga » [E! Gist] Why you should use 10 percent of your salary to womanise – Erigga to men

[E! Gist] Why you should use 10 percent of your salary to womanise – Erigga to men 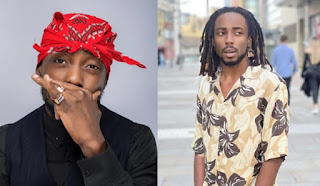 Nigerian rapper, Erhiga Agarivbie popularly known as Erigga, has said that it is not always good for a man to be thinking of making investments whenever he gets his salary or cashout .
He said that sometimes men need to use 10 percent of their money to have a good time by womanising.

Erigga stated this via his Twitter account as he noted that people also die, which means that if one should focus only on investments and not enjoyment, it would yield profits which the man won’t be able to spend.

He tweeted; ‘‘Anytime u cash out try dey use 10% carry woman, no be every time investment, people dey die too no forget”

In other news, Erigga earlier made a passionate appeal to internet fraudsters aka Yahoo Boys.

He cried out about the pressure of trying to keep up with the lavish lifestyle of Yahoo Boys being too much to handle.

Erigga hinted that their refusal to negotiate or bargain for items they wish to purchase and choosing to pay the exact price sellers fix their goods even though it is high is not helping others.

He made specific reference to polos and begged Yahoo Boys to make attempts at bargaining with the seller instead of just buying it at the stated price.

The artiste took to his official Twitter account to cry out in a series of tweets about how the fraudsters are ruining a lot.

Erigga further said that someone accused Yahoo Boys of making sure true love can never be found in Lagos.