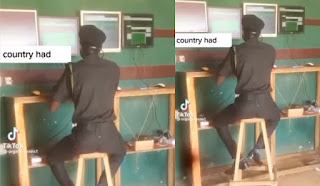 The person who recorded expressed sympathy by noting that the tough condition of things in the country probably forced him to go into gambling to make money.

See the clip below:

yes_shes_minah; With uniform this is wrong 😑

official_lustreoffor; I see a Wiseman not a police officer ask me how?

louis_scatter; Country hard even to put r for your hard dey hard you

In similar content, a Nigerian man narrated how a customer took a loan from a popular microfinance bank and lost almost everything to sports betting.

He shared the man’s story in a documentary about the dangers of gambling and people who are addicted to the act.

The young bet centre operator said that the man visited the microfinance bank and took a loan of N120,000 using his brother as guarantor.

But the shocking part is that as he was leaving, he entered his virtual betting centre which was in the same building.

He then used N119,000 out of the money to bet, unfortunately he lost it all. Feeling frustrated by the outcome, he used the remaining N1k to buy weed and alcohol