Home » Blaqbone » Video » [ENTERTAINMENT GIST] Once my next album drops, it’ll be considered for ‘Album of the year’ – Blaqbonez

[ENTERTAINMENT GIST] Once my next album drops, it’ll be considered for ‘Album of the year’ – Blaqbonez 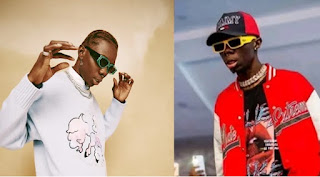 Nigerian rap sensation, Emeka ”Blaqbonez” Akumefule, has bragged that his forthcoming album, ‘Young Preacher’ would be discussed as a possible Album of the Year when it drops.

He said that it is a special album and he took his time to work on it because he wanted it to stir conversations online.

Blaqbonez who was being interviewed on Beat 99.9FM, said that he knew the buzz his song, ‘Back In Uni’ would create after dropping the video and he believes same will happened when he releases Young Preacher.

The Hip Hop artiste also said that he is surprised by the kind of positive reception Back In Uni got from fans because it is not the best song on the album.

Young Preacher is his sophomore album. He released his debut project ‘Sex Over Love’ last year and it was so huge that top artistes, Burna Boy and Wizkid endorsed the work of art.

Meanwhile, he earlier bragged about him and his label mate, Young John being two of the top buzzing artistes at the moment.

The duo are both signed to Chocolate City Music which was founded in 2005 by Audu Maikori, Paul Okeugo and Yahaya Maikori.

He stated that their songs are on the Top 10 charts and no other record label can brag of having two artistes with such feats.

Blaqbonez recently dropped a song titled Back In Uni while Young John released Xtra Cool which have risen through the charts and amassed massive streams as well as views online.

Taking to his Twitter account, the ‘Haba’ crooner tweeted; ”2 different artistes in the top 10, no other label can relate