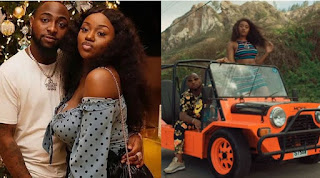 Nigerian singer-songwriter, David Adeleke, also known as Davido, has said that he lied to Chioma in order to get her to be his vixen in the music video for his song, Assurance.

The music star made this known while speaking on the genesis of their relationship in an interview with Ebuka on Black Box series.

He said that he has known her for about seven years and his friend, Lati is the one who introduced them to each other.

The DMW boss said that when the two of them met, they were still studying at Babcock University.

Davido said that she declined appearing in Assurance video but he begged her and lied that it was very important and he needed it, so she agreed.

According to him, Chioma never wanted the celebrity life, but she handled it so well even though she often gets hate messages for being in a relationship with him.

He also said that one key reason he knows she is the one is because she is someone he can live his first child, Imade with, and he is certain nothing will happen, even though she is not her daughter.

Meanwhile, David earlier said that he is willing to serve jail time if the love of his life, Chioma Avril Rowland commits a crime.

He made the statement during an interview on Hot 97, after the host, Miyabel, asked the singer how much he loves his woman.

In response to if he’s willing to do time for her if she ever breaks the law, the music star said he would definitely go to jail for Chioma without a second thought.

Also, Davido revealed that the highest amount he has ever spent on her was $46,000 (approximately N19,000,000), which was when he took her shopping at a mall in Dubai