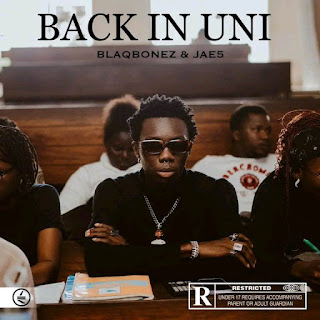 Super talented Nigerian rapper and songsmith popularly known as Blaqbonez unfolds this invigorating soundtrack called, Back In Uni, alongside Jae5, a British-Ghanaian record producer and mixing engineer. This is Blaqbonez’s third instalment for the year 2022 following, “Go Home”.

Back In Uni is a song you will surely cherish so much, the famous Nigerian vocal wordsmith, Blaqbonez officially known as Emeka Akumefule exhibits immense energy in his wordings, with production handled by Jae5, who blessed the track with so much quality sound and fitness.

Since 2018, Blaqbonez has reigned as one of the most celebrated and controversial MCs in Nigerian rap, the talented music entertainer is best known for blending Pidgin English and English in his music. The Chocolate City recording artist has also gained a huge fanbase who believes in his talent.

Nevertheless, this Jae5-produced track will be part of Blaqbonez’s forthcoming fourth studio album called, ‘Young Preacher”, following, “Sex Over Love”, in 2021, which holds tracks like Heartbreaker, Fendi, Bling featuring Amaarae and Buju to mention a few.

The video was directed by him after TG OMORI charged him 22 million naira for the video shoot.