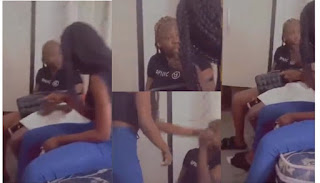 A Nigerian lady has been captured on tape quarreling with her best friend and roommate over a man.She asked her friend to delete the guy’s number from her phone after noticing some fishy activities between them.

But the girl refused and said that he is neither her boyfriend nor husband, so she has no right to demand that the phone number be deleted.However, the accuser tried to forcefully grab her phone but the bestie resisted, so it resorted to her getting physical.

The one asking that her friend delete the guy’s number noted that she was the one who introduced them to each other.

The exchange grew intense that some of their roommates who were watching all the while had to intervene.