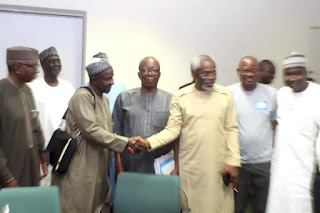 Speaker of the House of Representatives Femi Gbajabiamila last night said that in a matter of days the Academic Staff Union of Universities, ASUU will call of the 7 months old strike that had kept the citadel of learning under lock and keys.

Rising from a meeting with the ASUU leadership led by its President, Professor Emmanuel Osodeke called at the instance of the lawmakers, the speaker said that the deal had been sealed.

It will be recalled that the leadership of the House led by Gbajabiamila hd in that last 4 weeks held 4 different meetings with the academic body to resolve the lingering, knotty issues with the government.

Last week, the Speaker led a delegation of the lawmakers to the Presidential Villa where he met with President Muhammadu Buhari to submit the report of the meeting with ASUU.

Gbajabiamila said President Muhammadu Buhari would make a declaration on the “No Work No Pay” issue, which is a significant area of contention, on Tuesday October 11.

He said that both the government and ASUU had agreed to shift grounds on their respective positions in over all interests of the students and the country at large.

He said, “This is a recap to seal the deal on what has been a long fought, long hard road for everybody both for ASUU, the students and the government. As you would recall, some weeks ago the House got involved in this crisis and we had long, tough, intense meetings with ASUU. We had meetings with those on the government side and we are happy to report that as the result of the consultation and intervention of the House, very significant progress has been made and we are more or less at the of the road. Save for dotting some “I”s and crossing some “T”s.

“We agreed with ASUU and the government on certain things which we took to Mr President. I have visited the president twice. First time we made our recommendations with the government shifting some and ASUU shifting some. We spoke with Mr President. There was one sticking issue which was the issue of no work no pay. And the President did ask that he would suggest the recommendations and would have one more meeting which we did on Friday after the budget.

“That meeting was even better than the first one we had with him, and Mr President had agreed to settle things. I am not going to talk about that now, and that he would disclose whatever it is tomorrow,  Tuesday which is tomorrow. On that one remaining issue.

“But beyond that, the other several issues have been taken care of. We were able to make sure that what ASUU was asking for in terms of revitalization, salary, that there has been significant improvement, revitalization has been provided for in the budget. We made sure of that. The salary structure has been looked at and there has been improvement as well, and we made sure of that. As you heard Mr President say during his budget presentation. He appealed to ASUU to go back to class and that N470 billion total has been included in the budget.

“The issue of UTAS which was another important issue both ASUU and the office of the Accountant General and government have agreed that they will work together and the peculiarities of UTAS that is required for the payment platform IPPIS, they would sit down together and the chairman Committee on Tertiary Education would also be part of that tripartite sit down arrangement to include all those things that are required by ASUU in the IPPIS platform.

“I believe we have covered ground, covered most of the thorny issues and it is basically, what we have agreed with ASUU is basically to put everything on paper and sign off and I believe if we had met yesterday and the papers had been drawn up, ASUU, I am sure would have called of the strike today. But we only just met behind closed doors now and so we have to draw up the agreement as I have stated to you, and hopefully in the next couple of days, of course ASUU has to get back to its bases as well, once that is agreed, I am very hopeful and very excited about the possibility or probability the strike would be called of in a manner of days.

“I want to thank the union for having come this far and having reported at every moment that we have called them. Even today’s meeting was called just today and at such short notice, you were here and we have met in my office and I believe we have concluded positively. We did this for the sake of our students  and children and I hope it would be a thing of the past. I thank you very much, ASUU. I also thank Nigerians for their patience, and the students, having endured these many months. But I believe that this has hopefully come to an end in a matter of days.”

On his own part, the ASUU president, Professor Emma Osodeke said that between now and tomorrow, members of the body will sign some various documents to perfect the agreements

He said there was “light at the end of the tunnel”.

He said, “We have met briefly in the Speaker’s office and looked at all the issues. He has briefed us. We have taken note of what they have covered. As you know, in my union, we operate bottom-up. We don’t take decisions on their behalf without having their consent. We have agreed that between now and tomorrow, we are going to get some documents signed that we can take to our members. We will do that as quickly as possible in the interest of all of us, Nigerians and the students, so that this thing can be resolved as quickly as possible.

“From what we have seen today, for the first time since this our action started, we are seeing light at the end of the tunnel, because this is the first time we are having such a thing. We hope this time around there will not be any attempt by anybody or group to create something that will also make us run into anything again. We do hope that this will be the final in the interest of our children.

“Our struggle – thank God the National Assembly are joining us – is for the educational system in Nigeria. We want to have a university in Nigeria where we should be earning money from students all over the world and paying in hard currency as we are paying (overseas) so that our system will grow. That is why we are in this struggle. We want to have a university where the remuneration is enough to attract lecturers from all over the world, just as our people are going outside.

“As we speak today, we are having problems but we have not noticed it. We are creating so many universities but there are no qualified people to teach in those universities because the good ones are leaving. We just put people there, which is not good enough. We must create the environment. We are the Giant of Africa and we must act as the Giant of Africa. We should have people coming in – in droves – not people leaving. That is why we are here.

“I want to sincerely thank you for this your resilience, your intervention. Please, let all of us work together and let us put a beautiful end to this thing we have started, so that every Nigerian will be proud that we have universities we can be proud of. We thank you. We also extend our appreciation to the President for intervening. We do hope that this is the last one.

“I want to appeal that in future, we should not allow strikes to linger. A strike should not go beyond two days. If the way the National Assembly has intervened if we had done that long ago, from the beginning, to be allowed to do that all along, or those in charge of Labour and Education had done exactly this, we would not be where we are today. We would not have stayed more than two or three weeks in this strike”, Osodeke said.