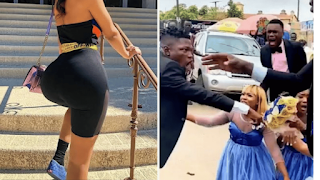 A Nigerian man has reportedly called off his wedding after discovering that his bride-to-be is a retired sex worker.

Apparently, the lady had hidden her unpleasant past from her fiance who later discovered it just a few weeks before her big day.

As narrated by a friend of the lady in a viral video, it was a man’s cousin who has patronised the bride-to-be’s sex business before who told him about the past of his fiancee.

After the husband got to know that the lady he wants to marry is a retired hook-up girl, he immediately called off the wedding and additionally broke up with her.

I think the guy was right to call off the wedding because if the bride-to-be couldn’t disclose that she was formerly a prostitute, who knows what other big secrets she might be hiding? Her past doesn’t define her, but honesty is very important in a relationship. Hopefully, she learns from this.

Watch the video below to know more…