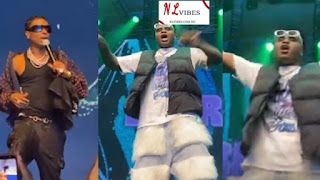 Nigerians have taken to social media to react after it was reported that Afrobeats star, Wizkid failed to invite Carter Efe to his show but brought out Berri Tiga.

Wizkid held his Starboy Live in Lagos concert at Eko hotel on Saturday and it was star studded, however, one highlight that got people talking was when Berri Tig hopped on stage to sing Machala which is owned by skit-maker, Carter Efe.

People were expecting that Carter and Berri would mount the tage to perform together or at least if both can’t come then Efe should be the one invited since it’s his song.

An attendee expressed shock that Tiga was the one invited not Efe and recorded the moment the musician was performing the hit song alone.

The fan expressed sadness that Carter Efe did not get the long awaited chance to achieve his dream of performing on the same stage with Big Wiz.

Watch a part of Berri’s performance below: