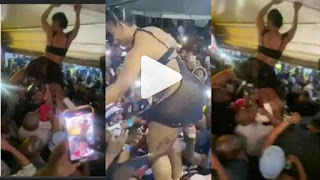 South Africa dancer and singer, Zodwa permit fans to have a touch of her while performing on the stage (Video)

Controversial South African singer, Zodwa made headlines with critics over her action during her performance in one of her concerts.

The singer who is also a dancer had permitted fans to touch her erogenous zones through her see through dress and under it.

In a video clip that captured the moment, some fans were seen putting their hands under her dress and some claimed to have fingered her in the process.