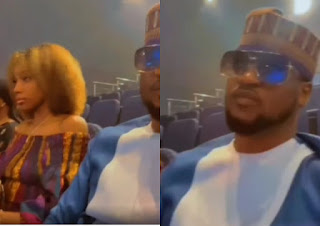 Taking to IG story, the father of 3 shared clips with his new lover.

The couple appeared  in style and had treated themselves to a well looking meal. Captioning one of the clips, Paul Okoye expressed gratitude to God.

His new lover is coming just a year after his wife, Anita Okoye filed for divorce in August, 2021.

It is no longer news that the couple are in the midst of a messy divorce centered on gross infidelity.

However, it seems the ex loverbirds are amicable as they seek to co-parent their 3 beautiful children.

Taking to his Instagram story, Paul gave a special birthday shout-out to Anita.

Sharing one of her birthday shoot on his story, he wished her a happy birthday.

Reacting to his birthday message, Anita expressed gratitude to him.

Taking to her Instagram story, Anita reposted his birthday message with a caption that reads, “Thank you”.

We are glad to see the estranged couple making peaceful moves.

Last year, in the heat of their divorce, Paul shunned her 33rd birthday.