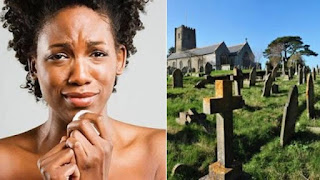 A  mother of three has been in a state of dilemma after discovering that her husband died 2 years after they married.

The story was shared by a twitter user, identified as @peace_igho, who took to the platform to narrate the ordeal of her neighbor who found out she had been in a marriage with an alleged ‘spirit.’

According to the narration of the user, the wife found out an unbelievable history about her husband after visiting his village.

The story reads, “Ok! So this woman in my area just discovered that her husband for years is a spirit!! They’ve got 3kids yo!!! Jesus Christ! She said she got pregnant for him while they were dating. Then they moved to my area.”

“Then they moved to my area. He bought a land and built a house. His neighbors said he doesn’t speak to anyone except his family. And he always walk alone.”

“So now after 3kids, she started demanding aggressively to see his family. He said they were in the village that he will take her there. He then gave her lots of money to go to the market to buy things they would take home to his family”.

“He would always get in. And when she asks, he will say the door was not locked. She opened his wardrobe and it was filled with money. She took the money and left with the kids. And put the house up for sale”.

“Oh I guess I mistakenly deleted a tweet, were I tweeted that when she got back from the market, she met a note he wrote apologizing for his absence and his address in the village”.

She traveled to the east with the kids, located his house and explained who she was but…”

“They said it wasn’t possible cos he died 2yrs before she gave birth to their first child. And they showed her his grave. I donno how I missed this part. I swear I tweeted it.”

OK! SO THIS WOMAN IN MY AREA JUST DISCOVERED THAT HER HUSBAND FOR YEARS IS A SPIRIT!! THEY’VE GOT 3KIDS YO!!! JESUS CHRIST!

Social media users thronged to the platform to express their thoughts. Some reactions are shown below:

@ChinagwaIfeoma said, “Why is it always the east the dead husbands are from”

@EMNservice1 said, “Well e fit real oooo.. But my only advise for youis that you should limit your nollywood movies 🎬 it will do you a great thing in life”.