Man gifts his friend firewood on his wedding (hilarious video below) 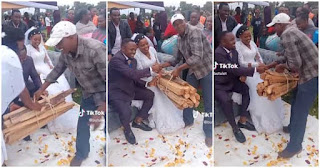 There was a moment of confusion and then laughter at a wedding occasion following a man’s awkward gift to the couple.

In a short TikTok video, the man approached the couple where they were seated and presented them firewood as a wedding gift.

The couple laughed it off as the man went on to strike poses with them as well as the firewood. The clip went viral on social media as some persons opined that the man’s gift is a bad omen. Others found it hilarious and passed funny remarks.

SM could not ascertain the location of the wedding or the couple involved as of the time of making this report.

user4956796370804 said: “What is the meaning of this firewood,in all culture it means suffering, hardship, badluck. “Given somebody a firewood is a bad omen.”

dic*ky said: “And I believe he was honest with it. cheering is the greatest thing in life.”winniewins1 said: “Everything is possible on this planet.” Gena Igorot said: “That’s very useful gifts with them. It’s symbolizing the warm up of the beginning of the new family.”

ogelism111 said: “What will my eyes not see.” simon said: “Culture is the power of ones identity love it! don’t judge by looking woods. who can tell me the meaning of wood?”Halimatusadiya said: “If am the one I will not collect it.”