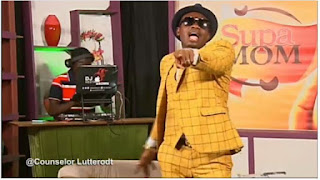 Counselor Lutterodt argues that people who scream God’s name during s*x, especially when reaching their climax, are candidates for 🙄.

The contentious marriage counselor made this argument during a discussion on live radio and supported his claims with a verse from the Bible which charged all Christians to give thanks to God in all things.

He explained that such people are praising God for granting them satisfaction and it is misleading when some pastors tell their congregation to desist from such acts lest they risk going to hell.

He even told Halifax Ansah-Addo that God is always pleased when people call on him during intercourse.

“The person is glorifying God for satisfying him or her emotionally. Why will God punish a person who is heard shouting Jesus!, oh God and many other such words during s*x? Prophet Kumchaha and his likes are those misleading their congregants that such persons will go to hell”, he emphasized.

Counselor Lutterodt disagreed with Prophet Kumchacha who argues that any woman who screams the name of Jesus Christ or God during lovemaking will never make it to heaven.

Lutterodt’s assertion has sparked outrage on social media as Christians in the country also quote Bible verses that proved the counselor was blaspheming.